School open on Monday: Dear parents/carers, following the gas leak, school will be open as normal on Monday 20th January. We look forward to seeing our students then. Hannah Millett Headteacher Stokesley School

109 Year 10 GCSE students visited Redcar on Monday 17th June as part of their GCSE Geography course. All students have to carry out a human and physical geographical enquiry and their understanding of this will be tested in their unit 3 exam.

We went to Redcar to see if the hard defences there were effective. Groynes are designed to trap sand as it moves along the coast so students had to measure the height of the sand on either side of the groyne. Our results showed that there was more sand on the north side than the south on each groyne. We then found out what direction longshore drift is along the coast (which direction the waves move in). We did this using oranges and timing for 5 minutes to see if they moved north or south. We used oranges as they can easily be seen but if they are lost they will decompose. We found that the direction of longshore drift linked with the sand build up on the north side of the groynes, so they are doing their job!

Students then had lunch in Redcar with many choosing fish and chips or ice cream.

In the afternoon we followed up some work we have done on river flooding and we looked at the Tees Barrage (where Steven Spielberg was filming his next film!) as well as flood defences in place in Yarm.

On the 24th and 25th of June,  Year 8 students, who have been studying rivers, got the chance to see how the risk and impact of flooding can be reduced. They walked north to south along the River Ouse that runs through York observing the many ways the Environment Agency have managed the river. From the water storage scheme at Clifton Ings, the large soil embankments near St Peters school, flood walls and gates in front of houses and then the huge Foss Barrier that stops the town centre fooding. Students had to identify the land use and what was at risk, complete a bi-polar survey on each defence judging how effective it was and back at school we will use Digimaps to calculate the height above the river each area was. All of this information will help students decide which is the best defence for York. 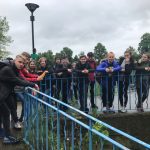 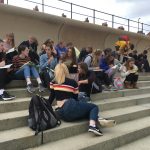 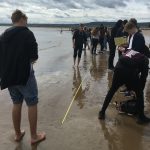